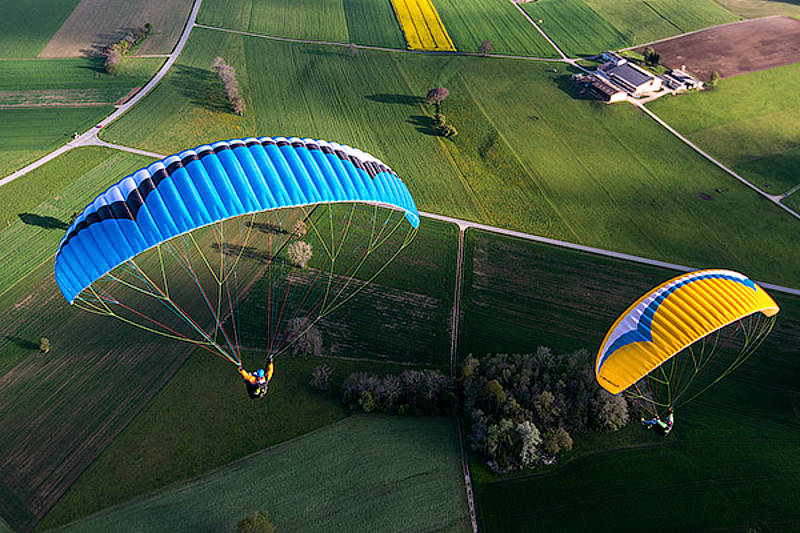 If you want to learn to fly, the best way is probably to do an intensive course, since it is proven that you progress much faster than if you give your flight lessons in a discontinuous way only on weekends. Our intensive paragliding courses are one or two weeks long.

Learn to paraglide in the sunshine of Spain

Our Paragliding Flight Center is located at Algodonales, southern Spain, unlike anywhere else in Europe, you can learn all the skills to safely paraglide in one or two weeks, meanwhile in other countries, it can take months to acquire all the skills to qualify for your pilot’s license. It is likely to be more cost-effective to take a holiday with us in our variety of flying sites compared to travelling back and forth to your local paragliding area.

This is a course for complete novices and is the first step in getting qualified to paraglide. At the end of this course, you have learned the basics of paragliding but you still need to fly under the supervision of the instructor. You need to complete the IPPI 3 Club Pilot Course to fly unsupervised.

This is the next step in your career to become an autonomous paraglider pilot. Once you have finished this course and all the tasks of the training program have been completed, you should have the skills you need to fly unsupervised.

Zero Gravity is a paragliding school recognized internationally by Federations and Associations such as RFAE, FAI, APPI and BHPA, which guarantees the quality of our courses and the professional training of our instructors.

In our paragliding school, you can be rated in one or more of these organizations.

The CIVL International Pilot Proficiency Information (IPPI Card) reflects the pilot's proficiency and provides a standard reference by which all national rating programs may be compared. The IPPI Card is based on safety and training standards defined in the SafePro program.
For the pilot who flies outside of his known or local area, it is an easy method of providing proof of flying experience and proficiency. When a pilot travels abroad, the IPPI Card  will identify the pilot skills. The IPPI Card is valid only together with a current national licence or rating card.

The learning progression consists of five stages, from basic to advanced. It also divides the participants into students, they must fly under the supervision of instructors, and autonomous pilots who can fly unsupervised.

Here you can compare the equivalent ratings between FAI IPPI, APPI and BHPA:

Paragliders look vaguely like parachutes as these are from where they evolved. However, they are very much more. Paragliding is now at a very exciting stage in its development, from being just a fun method of descent from the hills; Paragliding offers the pilot the sensation of true free flight for hours upon hours. Using modern high-performance materials a canopy only weighs a few kilograms and packs neatly into a rucksack. This makes this “aeroplane in a bag” totally portable and can complement other sports such as skiing and mountaineering.

Learn to paraglide: Steps to become a Pilot.

Paragliding is a potentially dangerous sport, so under no circumstances should you try to fly a paraglider without proper training. Your first step must be to enrol in a course offered by a certified paragliding school. While attending a school, you will acquire the knowledge necessary to fly safely.

The structure of the paragliding courses can be different in every school but the content is similar.

Professional instructors will teach you how to become a safe, competent rated paragliding pilot. During your course, you will do a minimum number of flights which includes ridge soaring and thermalling. The course also will include theory classes and you will have to complete a written exam before you are qualified to fly unsupervised.

Do I need a license to paraglide?

In most of the countries, a license is not required to paraglide, but there are some countries where you must get a paragliding pilot rating to fly. Some local flying regulations may require the pilot to have certain certified ratings.

Paragliding is normally regulated under the National Aerial Federation. It is a self-regulated sport, pilots and instructors alike adhere to the policies and guidelines of the Federation or another Association.

For your own safety and the safety of the other pilots, it is highly recommended to learn in a recognized and professional school and to get a rated license to confirm you have been trained.

To avoid the spread of the coronavirus, we have adopted all the recommended safety and hygiene measures to guarantee your and our staff health.

Remember to bring your own face mask or not attend if you have symptoms.